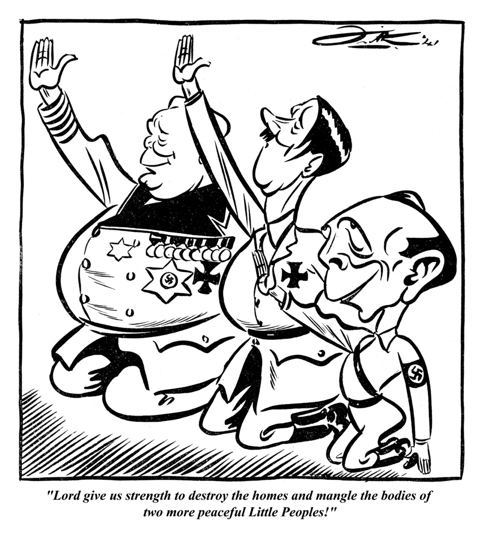 Lord give us strength…

It is a sad fact of life that it takes a war to bring the best out of man and the same can be said for cartoonists…With the faces of Churchill, Hitler, Stalin, Tojo and Mussolini…the cartoons very nearly drew themselves…Ideas flowed freely and the more outrageous ones were not fettered by any fear of writ or slanderous libel…

Britain declared war against Germany in 1939. As a dominion of the British Empire, Australia was also at war. Frith had followed the situation in Europe since the mid-1930s, and when war broke out his repertoire of characters was already well developed. Throughout World War II much of Frith’s work expressed his opposition to fascism and its leaders.

In this cartoon, Hermann Goering, Adolf Hitler and Joseph Goebbels, the leaders of Nazi Germany, are pictured at the time of the Nazi invasion of Yugoslavia and Greece, in April 1941.